Are you seeing what I’m seeing…?

Home/Production/Are you seeing what I’m seeing…?
Previous Next

In my last blog I suggested that creating fine wine is an artistic pursuit. This will mean, by extension that only some will fully appreciate what is created. In the case of wine, following the ‘tried and true’ path in the vineyard and winery, it is possible to produce ‘nice’ wine each and every time. You can aim to please everyone and produce ‘drinkable’ wine that everyone agrees is ‘pleasant and inoffensive’.
A recent reference to the artist, Jackson Pollock, reminded me of the controversy in 1973 when the then Prime Minister, Gough Whitlam, approved the purchase of his work No.11, commonly Known as ‘Blue Poles’. The art historian, Patrick McCaughey, at the time noted “never had such a picture moved and disturbed the Australian public”.
Initially purchased for $1.4 million, current estimates of its resale value range up to $350 million. I have always had difficulty appraising Abstract Expressionism and I would fall back to the saying “beauty is in the eye of the beholder” or in Italian, my wife would say “gusti son gusti”.
This brings me to recount a panel tasting of Tasmanian and Victorian Pinot Noir in 2014, held in London by Decanter magazine. We had sent our 2009 vintage Pinot Noir, a wine I had a ’love/hate relationship’ with since it was first bottled.
I felt it would ‘fly’ or ‘crash and burn’ because of its forthright character and it did…both!
Here are the tasting notes of the 3 panellists…

Roger Jones (2)
Dark and brooding, very intense on the nose, lovely truffle mushroom palate which lingers and combines with some lovely fruit in the background; not to everyone’s taste but I love it. 96/100

Now this wine would have claimed top spot if it had convinced Andrew Jefford. I hold no ill feelings regarding his appraisal as I have the highest respect for his palate. He shows in his prolific writing, a deep insight into wine and works assiduously to communicate his response to wine. I see him as the natural successor to the doyen of wine writing, Hugh Johnson.
But what to make of these diametrically opposing views of the same wine?

Again, in my last blog, I referred to the T.V program ‘Secrets of your food’ by Dr. Michael Mosley which identified the latest research into our senses of taste and smell and the potential variation in our receptors according to our genetics. Add to this, the interpretation of the sensory signals when channelled through the parts of our brain responsible for emotion and memory and the subjectiveness of wine appreciation becomes apparent.

So, a quick apology to you, Andrew, if you were to read this blog and a big disclaimer that I have no qualifications in psychology, but, imagine now being very ill with a respiratory condition: You’re feeling weak, nauseous, head pounding, your throat is raw and you have a nagging cough. Your memory of this event is of being bed-ridden, miserable, unable to eat properly, living on soft tinned fruit and vile ‘cherry’ flavoured cough mixture. Then, years later, you come across a wine in which your senses detect hints of this nightmarish memory…78 points may have been generous!
But who am I to talk, when I have an uncontrollable aversion to the ‘kerosene’ aroma that can develop on aged Riesling which excludes me from the appreciation of the great old Rieslings that so many enjoy.

Now… returning to my premise that fine wine is art. I was looking for an image to use in this blog and initially considered, of course, an image of ‘Blue Poles’ but after reading the policy of the Wikipedia website which goes to some pains to respect the sensitivities of artists and galleries which defend the memory of past artists, it made me re-evaluate this idea. Would a ‘thumbnail’ rendition of an original piece measuring 2m x 5m affect the ‘expression’ of the piece, changing the intended impact by the artist? I have to agree.
Maybe the way to see tasting notes is just the same, ‘thumbnail’ views, not the real thing. Only by direct personal experience can the ‘full picture’ be seen. So I chose an image we had used to make a poster years ago but abandoned the idea due to the risk of seeming pretentious. My intent was to highlight my efforts to create something thought provoking with a visual challenge- is this a shabby weather-worn rock or a piece of art? I was heartened in 2015 when the art historian and critic, Alastair Sooke in his T.V program, ‘Treasures of Ancient Greece’, choose this piece, ’Youth of Mozia’, to showcase the earliest manifestation of classical Greek sculpture in which a statue was representing not just a male figure, but ‘someone’ expressing a part of their inner spirit.
Finally, allow me to be blatantly commercial in urging those who haven’t tried our wine to check out our ‘taster pack’ on our website, buy this triple pack and decide for yourself if we are creating art or just another bottle of plonk! 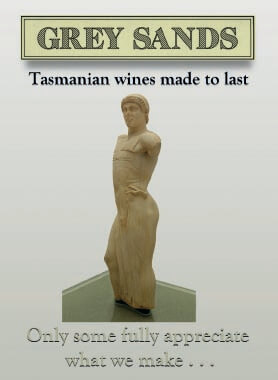 (A note regarding the two images on this blog, both are of rocks carved by man and both represent art, but I would put the first piece dating from around 5000 B.C into the genre ‘Abstract expressionism’, with all due respect to the artist)