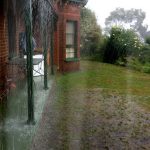 The 2016 vintage could be seen as the culmination of a warmer than average season (typical El Nino drought/heat), punctuated by a 180mm flood event around the 22nd of January.

It was the heaviest rain I have seen here on the property but it came so fast and hard that it was mainly run-off and probably delivered only the equivalent of 25mm of steady rain. Still we were grateful for this rainfall as our vines are dry grown (ie no irrigation) and berries were miniscule and the leaf canopies were thin. Our dam for garden watering was empty but filled to overflowing,  overnight (half a megalitre !)

I went from digging drains to release water building up in the carport, to bucketing out water getting into our roof cavity. Despite the conditions we had no cracking in the fruit and only some annoying ‘wash’ under the vines.
Our earliest vintage followed under excellent conditions to ripen our full range of varieties.

By May, areas of the property were dusty again and I had to pump a lot of water up to the garden to keep it ‘fresh’ for our last 2 open days.

What was unusual this year was the decreased  European  wasp population (did they drown? or did the severe winter frosts drop their numbers?) and the very late arrival of the pesky Silver Eye bird flocks. Not complaining though, as both can cause a lot of damage!

We had a good crew again of back-packers from France, Taiwan, Germany and Italy. We hope that the Federal government doesn’t change the tax arrangements for these seasonal workers who come with such enthusiasm.
Now a report on the young wines of 2016. It’s always a gamble determining harvest dates in Tassie with the fickle weather in Autumn.

Overall we have great intensity of flavour across the range with ripeness of flavour at more moderate alcohols. The really interesting feature is the ripeness achieved in the late reds, 13.9% alc. in the Romanesque and 14.6% in the Shiraz. I am happy with the wines from this vintage.

We managed to get away after bringing in the nets, for a few weeks to visit Portugal and northern Spain. As you would have become aware over time, I am fascinated by the diversity of varieties available in Europe, compared to the narrow range we have here in Australia. See my blog ( https://www.greysands.com.au/preserving-uniqueness/ ) for some insights into this treasure house of flavours on the western limit of Europe.

Just a ‘heads up’ to those of you who love gardens…Blooming Tasmania will be holding their inaugural ‘Blooming Tasmania Flower and Garden Festival’ in September. There are state wide events planned with the centre being at the Albert Hall in Launceston. We will be opening on this weekend as an addition to our regular openings of the SECOND weekend of each month from October 2016 to April 2017 inclusive.