What’s in a name: Grape varieties, do they matter?

I follow a particular wine writer, Andrew Jefford, who writes weekly for Decanter magazine and I find his views quite refreshing and challenging to the orthodoxy of the common wine discussion.
Two recent articles he has written, “Beyond best” and “Of Jellyfish and Guardsmen”, got me thinking that they could be brought together to help answer my question, “do grape varieties matter anymore?”
Back in the early 1980’s, Rita and I moved to England for 3 years and I became fascinated by the world of wine that could be found on the shelves of the many bottle-shops at hand. Wines from Austria, Bulgaria, Chile, Portugal, Lebanon and even Australia! (Kanga Red & Wallaby White…cringe!)
I started reading the works of Hugh Johnson and Emile Peynaud, and saw in the discussion of wine varieties, the historical hierarchy (French centric, of course), referring to ‘noble, semi-noble and common varieties’.
Hugh Johnson in his work,’The Wine Companion’ refers to 7 “classic” grapes, again a narrow list of French varieties. Later, Jancis Robinson in her book ‘Vines Grapes and Wines’ expands this list tentatively and more recently Oz Clarke extends it again to 17 varieties including Zinfandel (well known to Americans but do you know about it?)
But, to put this into perspective, there are good indications that there are over 10,000 varieties of grapevine selected over thousands of years, from the Atlantic coast of Portugal to the shores of the South China Sea.

Now, I use an expression for special wine that turns up infrequently but dramatically. I call them ‘wow’ wines. These are the wines that stop you as you swallow, forcing you to reassess again and again, the aroma, flavour and finish and reminding you of the ‘magic’ that wine possesses. I’ve had this experience with the so called ‘classic’ varieties such as Chardonnay, Riesling, Pinot Noir and Cabernet Sauvignon but equally I have had the same experience with varieties such as Vermentino, Fiano, Gruner Veltliner, Xynomavro, Plavic Mali and Ramisco.
What has changed and continues to change over time is the competency of winemaking, whereby ‘local’ wine, once produced under the most rustic conditions that shrouded the subtle beauty of so many varieties with a myriad of wine faults, are now seeing the clear light of day through the application of science.  There is an enormous range in the character of these wines, their colour, aroma, acidity and tannins and now in capable hands, we are seeing a rainbow of beautiful wines being made from indigenous grapes grown in the valleys, hills and islands of the wine world.
My point is that the old hierarchy of grape varieties is no longer relevant and is now held in place by clever marketing. The future of the ‘classic’ grapes is assured while ever the number of millionaires grows, especially in Asia. As the ultra- premium wines are locked up in the stratospheric club of high finance, it allows for the discovery, by ‘regular’ consumers, of the richness of the wine world that exists outside of the hallowed vine sites of Bordeaux, Burgundy and the Rheingau.

Returning to the question of grape varieties and their future relevance, we need to recognise that the Australian wine industry followed the path of the Californian wine industry, in that, without a long wine history as in Europe, which has resulted in specific grape varieties being grown in specific areas and enshrined in tradition and regulation, the consumer needed a reassuring tag to apply to their favourite wines.
Hock, Chablis, Burgundy and Claret proved vague and misleading without tradition and regulation. So varietal labelling and simple blends such as Cabernet Merlot and Semillon Sauvignon Blanc came to dominate wine labels and by default, wine making and marketing.
A feedback mechanism is set up, whereby the consumer then demands the simple certainty of varietal labelling and winemakers are ‘tied’ to the need to present easily identified varietal character to stay in ‘class’ at the wine shows which are organised by varietal classes. The end result is a battle to create the most intense ‘varietally true’ wine, rather than the finest wine which may show little preconceived varietal character.
I now see the diversity of wine made from so many grape varieties as a parallel to colours in nature starting with 3 primary colours but expanding out to the kaleidoscope of colours we see in our own garden. There is an equivalent kaleidoscope of flavours out there in the grape varieties. So what happens when all 10,000 grape varieties come into play in a globalised market?

Then along comes Andrew Jefford’s article which questions what is gained by knowing the variety, if the wines made from that variety can be so different in character, that if seen in a blind tasting, you would say that the wines were made from different varieties. Examples that spring to mind are the comparison of Chablis and a Chardonnay from the Hunter valley. Equally, comparing Sardinian Cannonau with McLaren Vale Grenache.
Adding to this conundrum, we must mention clones. These are selected variants (bud sports) of a grape variety, now used regularly in vineyard establishment. We attended a very instructive tasting of wines made from different Pinot Noir clones grown around Tasmania by Tamar Ridge. Immediately the variation in flavour of the different clones, amplified by regional characters across the Tasmanian landscape, stretched our understanding of any ‘true’ character of Pinot Noir.

Finally, I need to juxtapose two tag-teams of opinion bringing together four of the most respected wine commentators of recent decades-
1.    ”A wine’s varietal make-up is crucial, a far more important influence on its flavour and character than a geological wrinkle, accident of climate or craft in the cellar.” Jancis Robinson, Vines Grapes and Wines, 1986
2.    “Without the consistent character of each different grape variety to use as a measuring point, mere comparison of place would be meaningless.” Oz Clarke, Grapes & Wines, 2008
Compare these views with-
3.    “All wine of prestige is known by its origin, more or less narrowly defined, not just the particular fruit-juice that fermented. Eventually the primacy of place over fruit will become obvious, at least for wines of quality.” Hugh Johnson, Pocket Wine Guide 2000.
4.    “It may, though, be time to move on to the post cultivar-age. Why make a fetish of what is no more than the third most important thing about a wine?” Andrew Jefford, Decanter, online, Of Jellyfish & Guardsmen, 2016
So with two teams holding such competing views, I feel the need to adjudicate and my conclusion is… there is no hierarchy of identification.  The centre of the three overlapping rings below gives the best identification of a wine and probably can’t be deconstructed.

Now if this seems inconclusive and unsatisfying, that the complex world of wine can’t be summarised, categorised and finalised into one logical framework, then thank Dionysius for this wondrous phenomena and raise a glass to the endless exploration of wine and the pursuit of an answer to the question, “what really matters about wine?” 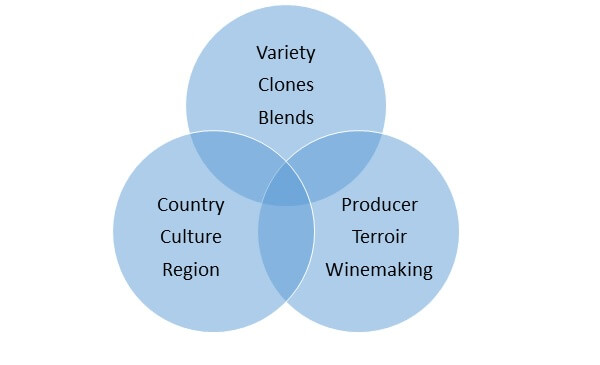