Having just returned from a holiday in Portugal and northern Spain, I wanted to pass on some observations of this wonderful part of the wine world. Before setting out I did some research and would recommend Sarah Ahmed’s ‘The Wine Detective’ site and ‘Wines of Portugal’ website.
It became obvious that the diverse terroirs and seemingly endless varieties and complex blends could not be covered in under 3 weeks, but I was determined.
So after tasting some 70 wines, my overview is more an emotional response and put simply…I liked them, a lot! 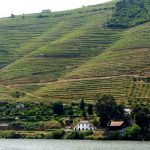 Running through all the wines tasted was an ethereal aromatic note which gave a sort of ‘exoticness’ to so many of the reds and whites.
To see as many wines as possible I searched for restaurants and tapas bars with good ‘wine by the glass’ lists and found some wine bars offering wine flights. The best place we found was Enoteca Belem in Lisbon, which also had excellent food to accompany the wine. Nelson Guerreiro, the sommelier, was an enthusiastic guide, with a broad knowledge of the modern wine scene.
Prices were generally moderate considering the quality on offer, bottle shop prices ranged from under 1 euro for bottled wine to 3 figures for old (and I mean old ) vintages of top labels. But for 10-25 euro the choice was enormous.
Two experiences I must recommend are dining at DOC restaurant built over the Douro river with panoramic views of the terraced vineyards rising above you (on left), and dining at Hotel Busaco, something I had read about in one of Hugh Johnson’s early books.
The food at DOC was extraordinary, on par with the best I’ve ever had, the wines by the glass delicious and the ambience… dreamlike on a warm sunny day with a soft breeze blowing. The service was attentive, down to carefully moving the umbrellas to shade us, without being intrusive. It was hard to leave!

Hotel Busaco is famous for being the last summer palace to be built by a King of Portugal and despite being an exotic confection of architecture, is absolutely charming. Don’t be put off by the regal formality of the place, the prices are moderate and the (silver) service friendly. The atmosphere is sensational, like something out of a set for a ‘turn of the century’ period piece, grand, elegant and in no hurry. We needed to tour the wild gardens to digest the food and amazing wines.
We tried two half bottles of their unique white and red. The wine list goes back to 1946 with many vintages available (at a price!)
But back to the wines. Here’s some generalisations,
I preferred the red wines of the Dao region to the reds of the Douro.
Yes, the Douro reds were bigger in flavour, darker, more tannic and oaky but the Dao wines were perfumed and silky and didn’t look like unfortified port.
Maybe the Douro reds needed another decade in the cellar.
Showing my cool climate bias, I loved the young Mencia (grape variety) reds in Spain’s Gallicia with their leafy, rhubarb and summer pudding aroma with a sour edged fruity palate and soft tannins.
The Albarino/Alvarinho whites from either side of the Minho were extremely fresh and aromatic and perfect with seafood. Loureiro was more floral but still had that fresh acidity.
As for the standout red variety it may come as no surprise, Touriga national has enormous potential, delivering power and finesse in the best examples and simply being delicious in most. 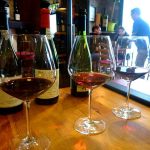 2015 Soalheiro Alvarinho (with an added depth and minerality)
2008 Hotel Busaco Branco (unique and complex)
2014 Dona Fatima Jampal (intriguing rare white variety)
2014 Casal Sta. Maria Malvasia (classic Malvasia tang and aftertaste)
2002 Bacalhoa Moscatel Roixa (lush fortified, perfumed and rich)
2014 Sao Mateus Alvarelhao (light in colour but big in aromatic flavour)
2011 Quinto de Saes, Dao (what a mesmerising aroma and silky palate)
2002 Hotel Busaco Tinto (still deep, dark and savoury)
2006 Colares Chitas (perfect balance from Ramisco vines grown in sand dunes)
‘Forty year old’ Kopke port (all you could want from a mature port)
I do like a good beer and can recommend in Santiago, O Bandullo do Lambon with a great range of Spanish artisan beers and a pumping atmosphere from revellers who have finished the Camino walk. In Barcelona you can’t miss Beerlinale with 30 artisan beers from all over Europe most on tap, and a huge range of quality tapas to accompany the beer.
Finally a brief aside, all 70 wines were under cork and all were in perfect condition, not one ‘corked’ wine. And after being on the receiving end of bad corks in the past, I am very sensitive to TCA and oxidation.
The usual culprits, Chardonnay, Viognier, Cabernet and Shiraz are making inroads into Portugal, turning up in ‘Super’ wine blends at high prices but  I avoided these happily and easily on our journey. There is such a vast repertoire of indigenous varieties and blends, leaving no time to waste on these unnecessary concoctions. 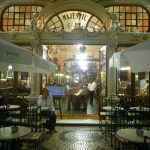 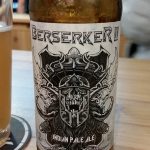 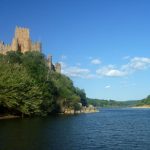 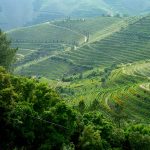 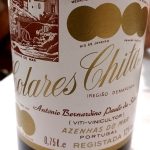